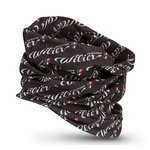 Compressor and drinking bottle in one: the Booster Tubless Set from milKit
To mount a tubeless tire, a huge blast of air is needed so that the tire bead quickly presses into the rim flange and tire seals. Depending on the tire-rim combination, this rarely works with a conventional air pump. For this, compressors are often used, which can be found at gas stations or in workshops. So that this can also be done on the go and without a compressor, there is now the Tubeless Booster from milKit. Special advantage: As a nice side effect, the bottle can also be used as a drinking bottle.
features

This is how it works: fill the bottle with a normal air pump and then press the valve: done
The milKit Booster feeds the compressed air directly into the valve - no loss of air pressure
The Tubeless Booster is so light that you can always have it with you
Thanks to the existing drinking system, the bottle can also be used as a drinking bottle
High security - tested several times at maximum pressure
Produced in Switzerland